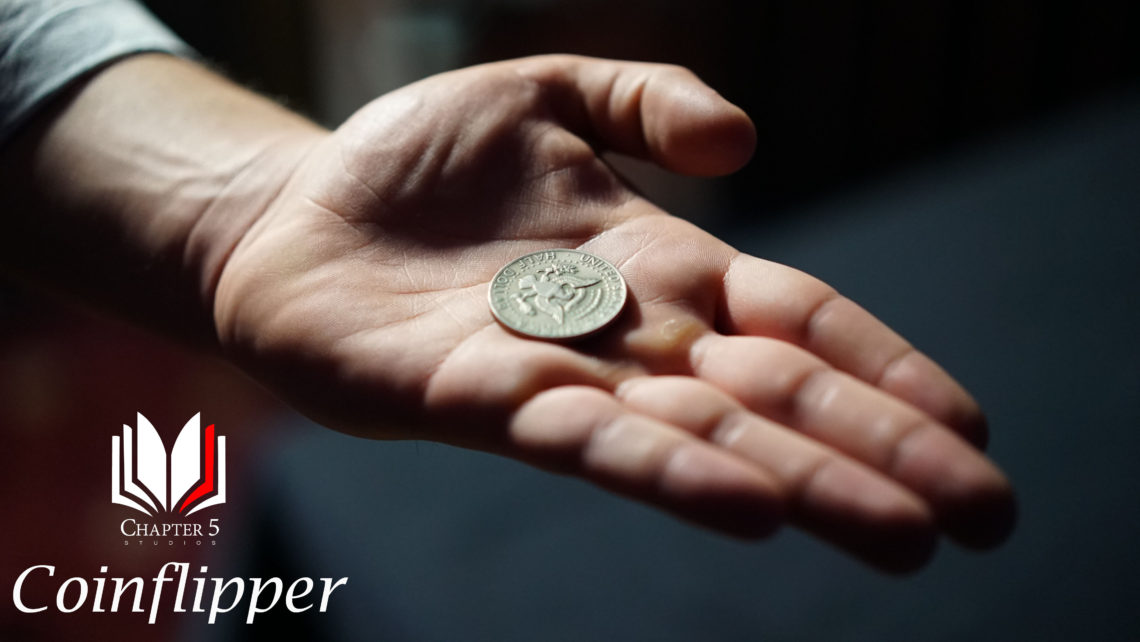 Tropfest is Australia’s largest film festival. Many people from across the country and the world submit their creative stories to the Sydney based competition. Chapter 5 studios made it their aim to submit a film to compete in 2017.  The journey however proved to be a lot more complicated then we all thought.

The script we chose was the ‘Coinflipper’ which was written by Marco Di Martino (Creative and tech at Chapter 5 studios). The film was about a gambler who was unable to make complex decisions, so he uses a coin to make them. Thus, the script also had many themes and ideas that we saw to be very effective if shot right.  Marco was selected to Direct the film as well as Director of Photography.

The film had 4 actors and all took place in one location. A location we could not find. Alas a casting call went out in late October. We received over 100 applicants for the roles. The applicants were then shortlisted to 10 for video and face to face auditions. The decision was made to place Daniel Facciolo (HR manager of Chapter 5) to play the lead Coin flipper after describing his previous acting ability and desire to act. Peter Spowart was chosen for the supporting role as well as Trisha Devisha for the female lead. Both actors gave outstanding auditions that showed their skills and talent. A casting dropout however affected the final candidate and filming needed to get started.

Yet, for a strange reason, it felt everything was against us. We struggled to get a location and needed one more person for the film. In a few days, we had help from Zane Dirani who informed us of Music land. A small bar located in Fawkner. It was a great location and we quickly booked in dates.
However with no actor, James Di Martino (Business Director of chapter 5) took on the final role.

The first day of shooting for Tropfest did not go according to plan. Peter could only come for a few hours which meant that we had to film out of order. Due to the time limitations, we had.  Screening and blocking as well as lighting all worked against us.  Most of all, everyone continued to work really hard but at the end of the day the shots were not as effective as we needed them to be.

After looking at the footage the team took three days to plan out the stage, spending a night recreating the scene at home as well as recreating our shot list, we were all prepared for day 2.

The second day of shooting was magical. Marco was on the ball from the moment we arrived, as well as John who assisted with cinematography (executive production at Chapter 5). With a limited time of 7 hours we needed to shoot the whole 7 minutes of the film. Most of all, everyone worked very effectively.   Daniel and Trisha being standouts in their roles. They really deserve recognition for their parts, each of them had a certain charisma that gave way to some great scenes.

Finaly we finished the day and were really happy with the scenes. This took us to the next lengthy phase.

The score was created by Michael (executive sound and mixing at Chapter 5) who did a great job in getting the music to suit the film. Marco spent days editing and cutting different versions of the film to make sure it was up to standard. As a result, the editing process took us until the 15th which was the due date of the tropfest film. Marco finished editing (after spending three whole weeks perfecting the film) at 8am and then submitted the movie.

The team watched the final cut and were very pleased. The film was both enjoyable and put together in a very professional way.

While it would be nice to make the finals Chapter 5 were very happy with the film and consider it to be a very enjoyable movie regardless of the outcome.

With 2017 around the corner Chapter 5 aims to release better quality and increasingly innovative short films and collaborative shorts.  With a desire to expand the team and have a game plan for creating 6 short films