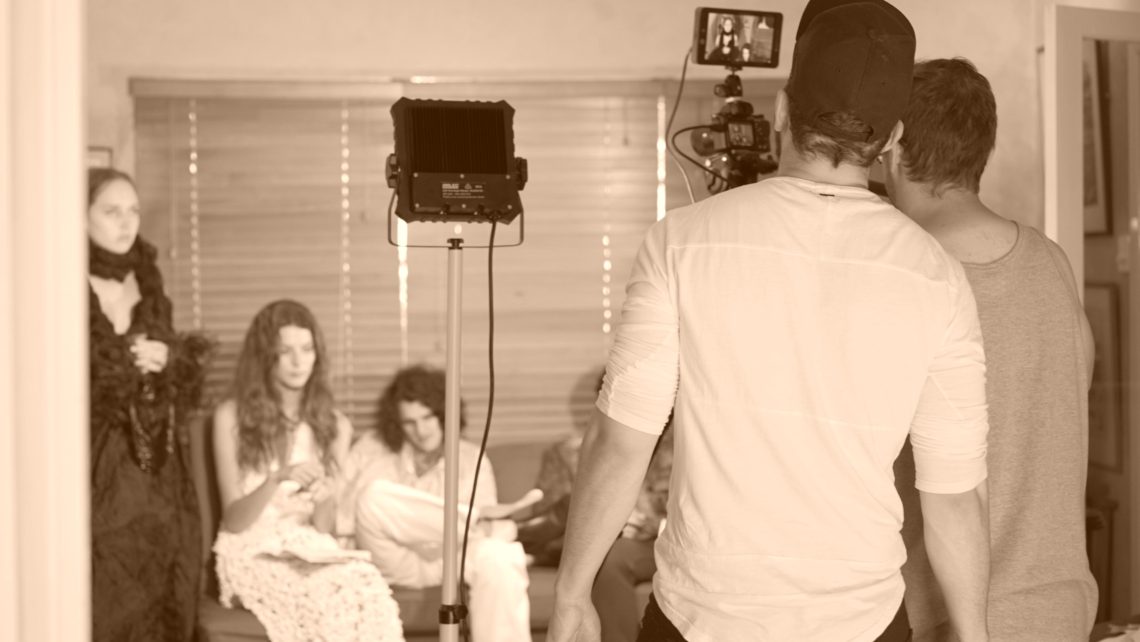 28/2/17- This year started with the planning of a short film titled, ‘The painted world of Alasius Pinkarmy’. This blog post documents the journey of the production process and how Chapter 5 gets their ideas to screen.

The painted world of Alasius Pinkarmy was written as one of the shorts Chapter 5 would produce for Tropfest. However, with Coinflipper being the more simpler film to shoot The painted world was put on hold. The story follows an eccentric painter who is trying to paint the best painting in the world. Comedy ensues.

Intensive planning was undertaken to avoid disappointments. Scouting for a location began early to avoid last minute mistakes. The decision was made to Air BNB an apartment and sleep there for three nights. This would give everyone more than enough time to finish the short film.

Costume design was undertaken by Saphire Gaskas who provided the look and fashion for the three female characters in the film. The male costumes were all selected by Marco Di Martino and mixed and matched by the Chapter 5 team. 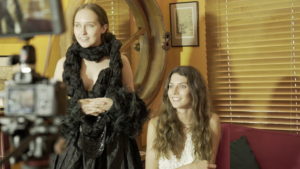 The main role of Alasius was given to our own crew member Marco Di Martino and the role of Mikius Bronzefeather went to ‘Coinflipper’ star Daniel Facciolo.  Peter Spowart who played Wayne in Coinflipper was brought back for the role of Alasius’ mentor Barnsworth. A casting call was put out and we found some amazing talent in Georgia Eyers for the ‘passive girl’ and Natasha Arancini for the ‘angry girl’. Gunita Kennina who had done previous promo work with us was given the role of the ‘annoyed girl’. That left the last character of Octavius which was given to Brad Douglas as he looked and fit the part.

In the last week of pre-production Natasha had to fly back to Perth for personal reasons. Devastated at losing an amazing actress the team quickly found Anna Rochfort who proved to be a great pick for the passive girl, Georgia was then given the role of the angry girl. This proved to show that anything can happen at any time of production. The importance lies in always having a backup plan.

The round table proved to be a very good indicator of everyone nailing their roles. It also proved to be a great ice breaker for everyone to get to know each other and start to see the script manifest into reality. 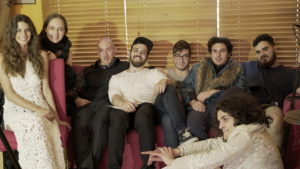 This line of business is purely risk/reward. A few decisions made such as giving Marco a lead role without any previous acting experience as well as John Gaskas as chief DOP was a big gamble. As well as Gunita who was purely a model and Brad who comes from personal training background. However, the gamble was something that if worked would greatly benefit the short film.

Day 1- Not every day will be as smooth as this

As soon as the crew got to the house we unpacked and went to the beach. It was a risky move but the rocky pier proved to be a great location for some filming. Luckily the risk paid off and we didn’t fall over into the water below. The next scenes all flowed within the timeline as Peter came for his scenes and then Gunita and Saphire for the final scenes of the day. The crew did some more shooting in the night and all in all went very smooth. Little did we know the next day would come crashing down on us. 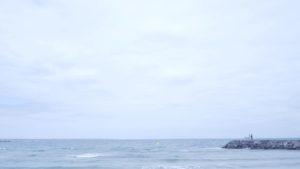 The team had a 7am start with little to no sleep as make up was at the house early. Filming started at 10 and proved to be very challenging. When dealing with five people shadows formed on the wall. The shadows did not go away no matter how much time we spent trying to eliminate it. This proved to waste precious time and set us back. No matter how much planning we did, we didn’t take into account the lighting of the room.

After 16 hours of filming the crew went to sleep. Everyone was determined to work hard on the Sunday and fix the mistakes of Saturday.

On the Sunday, a trip to buy more lights helped out to eliminate the shadows of the room.  The team worked hard to make sure we finished ontime, working until 4am to finish the short film. With this the team was able to finish filming the painted world. It took a total of 40 hours over three days but the team worked very hard to make this film come out strong.

The short film is now in post-production where editing, sound mixing, colour grading and the score will be created. A separate blog post will focus entirely on the post production of ‘The painted world’

The short film will hopefully be submitted to Sundance film festival and other festivals around the world. The project provided a big challenge for the team, and the 40 hours of filming proved to be a fantastic training art for Chapter 5 studios.

Next- The game plan (March)